I love a body of water.  Any body of water. I spent most summer nights after school growing up at one of our many beautiful beaches only minutes from home in New Zealand.  It has the ability to take all the weight off my shoulders.  I still get a massive smile whenever I see the Thames - makes me remember how I felt when I first came to London.  And in July 2015 Mel and I set about paddle boarding the length of the River Thames from it's source at Thames Head to Southend Pier.

One last thing about my school days. It was drummed into all of us at school to 'be a tidy kiwi'.  Those of us who have walked along the canals or the Thames in London know how much rubbish and plastic waster there is… and its us as people that have created that.

The River Thames plays an important role in all our lives - I didn't realise previously how much. I wanted to share a little of what I learnt from my training with Thames21 to become a citizen scientist, and a few facts from the Port of London Authority.  Here’s a few interesting things I found out:

2.  It is no one’s legal responsibility to ensure our rivers are kept clean and to remove the rubbish - it falls in-between authorities, which is one of the reasons why the charity Thames21 was set up 11 years ago

3.  All the rubbish from the City of London is removed via barges on the Thames

4.  Its a tidal estuary which carry’s 20,000 tonnes of sediment per tide and has a 7 metre tidal range - thats what makes it brown

5.  The tidal Thames (from Teddington) has 30 bridges and 20 tunnels

6.  The tidal Thames is the UK’s busiest inland waterway for freight.  Over 2 million tonnes of materials are moved on the river every year, keeping more than 100,000 lorries off London’s busy road network

7.  The Thames Path has been linked up to make it the longest riverside walk in Europe - 184 miles (296 km) from source to the mouth of the estuary.

8.  Our drinking water comes from the Thames, but thats also where our sewerage sometimes ends up!

1.  Seals breed and nurse their young in the estuary

3.  Eels although these have dramatically declined in numbers

5.  120 fish species, including salmon and a tone of birds

1.  London has a combined sewerage system, which means all our sewerage and rain water goes into the same pipes, whereas most other cities have theirs split between two pipes

2.  Our sewerage system was built for Victorian London which was advanced in its day for up to 4 million people.  We have the same system in place now, but with 8 million people

3. Our sewerage system is no longer fit for purpose… when it rains, the pipes reach capacity, so there is only one option… the overflow is released into the Thames (heavily diluted from the rain water… but still!)

4.  On a normal day, all our sewerage goes to one of the six sewerage treatment works along the Thames

There is a massive megastructure project that is now underway.  Its the Tideway Tunnel project.  The plan is to build a major new sewer to tackle the problem of overflows from the capital’s Victorian sewers for at least the next 100 years and enable the UK to meet European environmental standards.

What can we do to support the health and wellbeing of our river?   Get involved with Thames21! 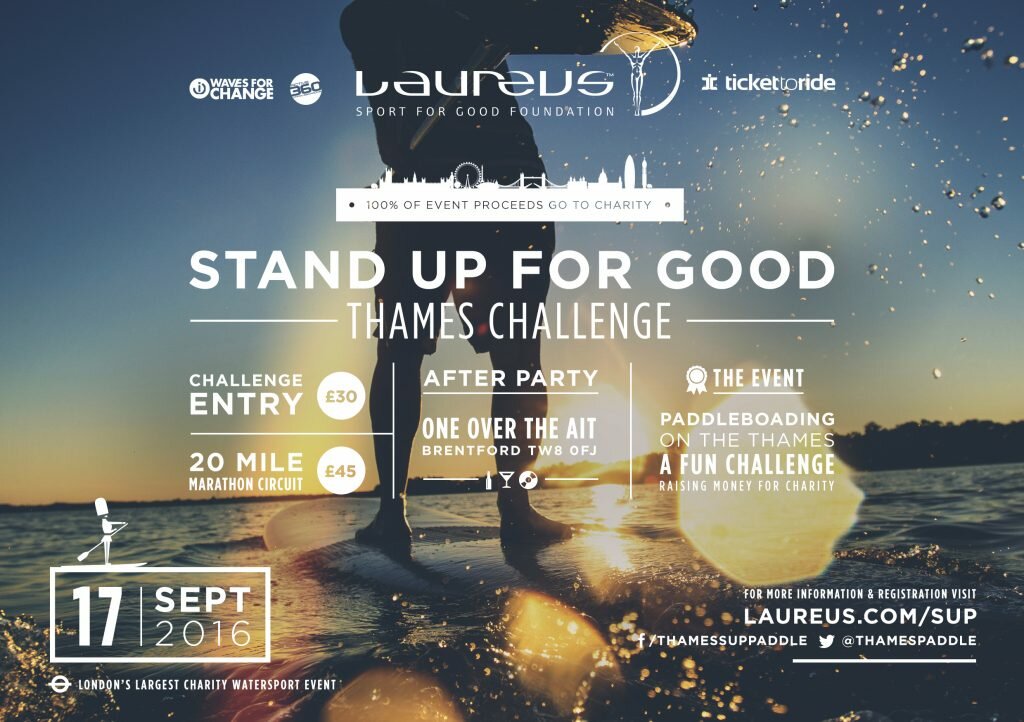 Looking to take part in the relay?  Come and join Laureus and Waves for Change in their Stand Up for Good Challenge on 17th September.  Choose the scenic mass paddle from Kew to Richmond return or if you are looking for a challenge take on the marathon from Shepperton. Sign up to the event here.

Find out how you can help clean up the Thames