Thames21 is one of the many charities acting as a voice for London’s waterways, working with communities to improve rivers and canals for people and wildlife.  Thames21 have recently published the article below detailing the current issues.

Food packaging responsible for 74% of litter found in the Thames

28 July 2016: New data from Thames21’s Thames River Watch programme shows that food packaging in the Thames is one of the biggest culprits contributing to the river’s litter issue. Since its launch in 2014, Thames River Watch has conducted 36 litter surveys on the river foreshore with the aim of gaining a greater understanding of the types of litter present in the Thames and where it comes from.

The study, conducted by a network of trained citizen scientists, has thrown up some interesting finds about the health of the river. Not least that the 36 litter surveys, recorded approximately 35,000 pieces of plastic, less than 2.5cm in size, blighting the Thames foreshore.

Alice Hall, Thames River Watch Coordinator at Thames21 said: “What is worrying from our findings is that food wrappers are not only one of the most common items found littering the Thames, but also that they seem to be degrading into smaller and smaller pieces; adding to the global microplastics crisis.”

The data being collected by volunteers is helping to identify the main items of litter that are finding their way to the river. Of those that are clearly identifiable, the most common to date have been found to be food wrappers, takeaway containers, drink bottles and cotton buds.

AJ McConville, Thames River Watch Coordinator at Thames21 explained: “Our main objective is to prevent litter from finding its way into the Thames in the first place. With this data, we are able to pinpoint the type of litter present and better understand how it is getting into the river. This is crucial to developing solutions to effectively combat the littering issue affecting London’s iconic river at source.” 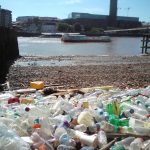 The full results of the Thames River Watch programme will be published in a report later in the year and will be available for public view at www.thames21.org.uk

The public are urged to take greater care when disposing of their litter and to take it home if bins around the capital, especially outside fast-food restaurants, are overflowing.

Find out more or join the Thames River Watch as a citizen scientist by visiting: www.thames21.org.uk/project/thames-river-watch

← About the Relay
Stand Up For Good – Thames Challenge 17th September →